Following-up your own Tweets and Creating a Sensible Thread

We all have faced that moment when we need to add a little more to your last tweet. May be what you have in mind can’t simply fit into 140 characters limit, and you need to find a way around to get your whole opinion out there. May be you tweeted something and then you remember you need to add something more to it.

I have seen some people divide ideas into multiple tweets and place “1st of 3”, “2nd of 3” etc at the end of the tweet, so that people who sees that would look for next tweets as well. Some simply use “1/3”, “2/3”, “3/3”. This approach doesn’t do anything more than letting people know there are more tweets related to the one someone just saw. They have to come to your Twitter profile and look for the other related tweets. If the tweet is few days or more old, they will have a hard time searching for it and it’s most likely that they will never bother to.

The only solution is finding a way to display all the related tweets in one place.

That is impossible, right? We don’t have any options to tell Twitter that there will be following-up tweets for the one you’re currently tweeting, or tell it that the current tweet is a follow-up for a previous one. Well, not really – we have that option. But it is hidden in the plain sight.

We all know that Twitter can identify replies to tweets and it can display a tweets with all the replies to it. We are going to use that feature for our purpose. I am not sure whether Twitter intended it this way, but it makes sense and does work. This can’t be any more simple – you just have to reply to your own tweet!

When you have a lengthy idea to be tweeted, just start typing. When you reach 133 characters, type “… TBC” so that people would know that the tweet isn’t complete and it is “To Be Continued”, and then tweet it. Now click the “Reply” button for the tweet you just tweeted. Twitter will automatically fill in your Twitter username and any other Twitter usernames you had in the last tweet in the reply box, just select them all and delete. Type the rest of the tweet. If your tweet is exceeding limits again, just repeat the process.

If you need to add something more or “comment” on a previous Tweet you tweeted, just find that old Tweet and reply to it. Just remember to delete unwanted usernames Twitter auto fills for you.

Following is an screenshot of a Twitter thread created that way: 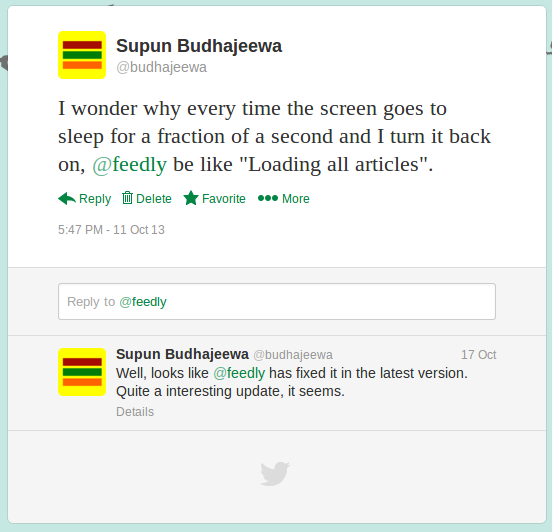 On 11th of October, I have tweeted about a glitch I experienced in news reader app Feedly. On 17th, I found that they have fixed it. I needed to comment on my tweet about the glitch and say they have fixed it, so I did what I explained above. If someone directly come to the original Tweet, they’ll see my comment and know that the issue is no longer there.

Don’t forget to leave a comment and tell me what you think about this.

Credits: Some Image(s) From: http://wallnen.com/wallpaper/twitter-02-hd-wallpaper.html.