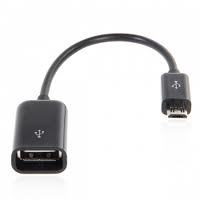 My Sony Xperia P supports the technology called “USB OTG“, which stands for “USB On-The-Go”. This technology allows devices to act as hosts and connect to other devices through USB cables. Since the moment I got to know that my phone has the ability, I wanted to give it a try, so I ordered a cable from eBay.

This is what Wikipedia says about the technology:

USB On-The-Go, often abbreviated USB OTG, is a specification that allows USB devices such as digital audio players or mobile phones to act as a host, allowing other USB devices like a USB flash drive, mouse, or keyboard to be attached to them. Unlike conventional USB systems, USB OTG systems can drop the hosting role and act as normal USB devices when attached to another host. This can be used to allow a mobile phone to act as host for a flash drive and read its contents, downloading music for instance, but then act as a flash drive when plugged into a host computer and allow the host to read off the new content.

The one I ordered from eBay cost me 2.99USD, and it arrived within about 3 weeks. I got it when I was working in the office, so I got the chance to test by using it to connect several keyboards and mice to my Sony Xperia P. All of them worked perfectly well, here are some photos of it:

I used this cable to connect a USB Flash Drive as well. Android mounted it in the file system without any issue.

After I tried plugin in these devices to my Sony Xperia P through the USB OTG cable, I wanted to try and connect both mouse and keyboard to the phone at once, which I did later on. I hope to blog on that experiment as well.